May 2014 Vamos Paella catering at the Charleston Festival 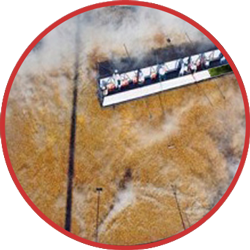 After a busy summer of wedding catering and cooking for parties and corporate events, we did the Spanish thing and took off to visit our finca in Murcia. This year we drove, passing through a few Spanish regions along the way. All over Spain the Spanish were getting ready for their annual paella cook-ups where anyone and everyone takes to the main village square to cook their best paellas. These are quite an occasion as paella lovers bring their tripods, pans and leña – wood from the orchards to cook on – to keep alive recipes passed down through the generations. They’re always lively events and passions can sometimes run high as the locals compare well-guarded paella recipes. In the past, we’ve witnessed fights breaking out over whose paella recipe is the best…whether you should use colorante or saffron, whether you cook with a sofrito or not, whether you cook it over wood from the vines or lemon trees…

Last year, though, the highlight was the giant paella for 110,000 people, which broke the world record for the largest paella, making it into the Guinness Record book. It was cooked by the Valencian company Galbis in Moratalaz in Madrid and broke their previous record of cooking paella for 100,000 in 1992.

Their paella pan was an enormous 21.5 metres wide, which makes our pans look miniscule, and it needed a platform half way across to allow the cooks to stir it. Not content with leaving it at that, Galbis are planning to break their own record again with an even bigger paella in Miami.